I just experienced my first THOUGHT BUBBLE comics Convention, the biggest and best (according to those that know) in the UK. It was brilliant, exhausting, overwhelming and, without a doubt, massive!
I packed JoJo episode 1 and my 3 new comics and set off to Yorkshire, negotiating flooded town along the way.
Before I set off, I'd had some lovely pre-convention reviews, like this one from Andy Oliver at Broken Frontier. And Mary and Agnes was already selling well online after all the great publicity for the BBC Alba film 'The President's Mother' (by Calum Angus Mackay, Mast-Ard Studios and Torcuil Crichton)in which it featured. So I started the weekend full of enthusiasm to sell comics, see friends and make new contacts. 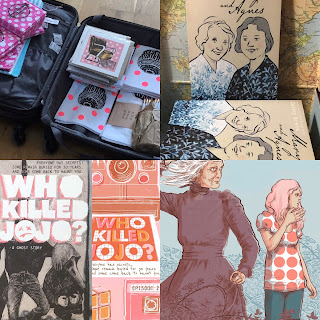 I did all of these things and more, and will go into more detail in my next post. But, for now, I've an apology. Several people have mentioned that my shop link doesn't work from their phones and I'm trying to sort it. If you are still having trouble, try this.

I'm off to The Cartoon Museum tonight to the Laydeez Do Comics meet-up. I'll post again soon.