Say 'Yes, please' to Everything

You know that old cliché about there never being a bus when you need one, then three come along at once? Well, it's often like that when you're a freelance writer/illustrator.

I was given a couple of great bits of advice when I was at college. One was that artists tend to spend more time pitching for work and advertising themselves than actually being artists. I soon learned that this was true and luckily (having been warned) I'd prepared myself for all the cold-calling, art editor shmoozing and endless fee negotiations. 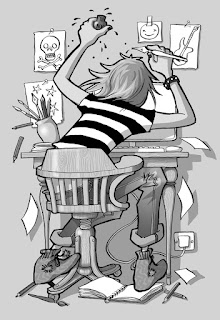 The other was that freelancers are very lucky if they get a steady stream of work arriving at manageable intervals throughout the year (even with an agent), allowing them to pay bills each month, buy food and perhaps even keep a car on the road, like a normal person. I was warned that I might have to last for several months without any work (living on baked beans and pound coins picked out of the fluff behind the sofa) and that, when they did come along, I should say 'yes, please' to pretty much everything offered.

They were right and I did. I still do.

That's why I now have an extraordinarily full diary this summer. I've been saying 'yes' ALOT. Here's what is on my to do list before school resumes in September... 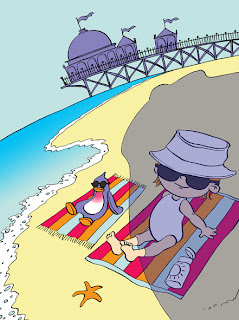 * Cover Artwork for a short(er) book for Barrington Stoke
(these last two actually aren't due until next year but no doubt I'll begin work on them now)
* Finishing a video for my US publisher
* Blogging, Tweeting and Facebooking about Scarlett Dedd being published in US (in August)
* Blogging for GirlsHeartBooks
AND I'm going to be appearing at the Hay Festival and Edinburgh Book Fest (tickets still available)
AND I'm talking to a local school about possibly doing some murals for their English corridor!!!!! Phew!

So, I'm going to be awfully busy, but it's all stuff I simply LOVE doing and won't mind a bit if I'm typing or painting through the night. As long as I make sure I take a few days off to rest and enjoy this glorious weather, I expect it's going to be a perfectly marvelous summer.