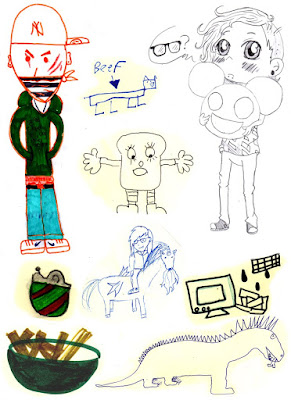 I visited the Warwick School in Redhill today where I did two workshops with Yr8 and Yr9. Well, that's not strictly true. I completed the workshop with the Yr8 group but was interrupted by a fire alarm just as I was about to introduce the writing task to the Yr9s. That's now happened to me THREE times in different schools! Just as it's getting interesting, brrrrrrrrrrrrrrrrrrring! I'm sure they don't do it on purpose but it completely mucks up the session, as you can imagine. All the poor Yr9s got was me talking about myself (boring) and no chance to be creative.
Still, I hung about in the library through the lunch break and was joined by a third group of eager book-lovers, so that made up for the aborted workshop. In fact, the lunchtime group were brilliant, very funny, and there are probably a couple of people who will end up as characters in my next book!!
The 'Truth' Detector Test workshop was great. Students were set the task of writing (and drawing) their day so far without telling the truth. The further away from the truth the better. So, according to the Warwick students, breakfast in Redhill consists of catfood, worm milkshakes, pig guts, strawberry custard, beef, marshmallows and gravy (or 'lunch' as one wit suggested). They also convinced me that on the way to school they had seen unicorns, werewolves, aliens, Cher Lloyd on the bus and Justin Bieber outside Poundland!
Astonishing!