Lost Voice after Weymouth MY VOICE!!! 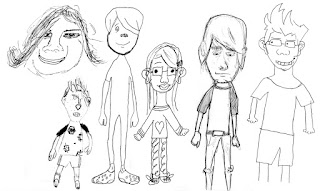 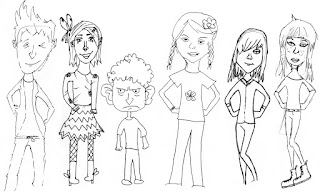 I attended the Weymouth MY VOICE Roadshow yesterday and have just about recovered. What an awesome event! I got quite excited on the journey down from London, then more so on the walk to the library in the sunshine, because Weymouth is at THE SEASIDE! Woohoo! A day at the beach! I'd almost calmed down after that thrill when I was led in to the venue via the back entrance where a graffiti artist was creating murals with a young team of Weymouthites, which was totally cool and set the tone for the rest of the day.

I had missed the Meet the Publishers panel where the speakers - marketing, publicity and editorial experts (Commissioning Editor of Teen Fiction no less) from Headline - had been given a grilling by their audience. I hear they gave excellent answers. I already had an audience gathering for my workshop so, after a small technology delay (!), launched in to a short introduction (viewed on a very small screen!) followed by a Cartoon U drawing session. Here are the results. Great aren't they? I was so impressed. Not just by the drawings but by how creative Weymouth teens are. I chatted with several young people who will, no doubt, be successful published authors, artists or designers one day.

I signed some books and chatted some more then was interviewed by two charming young Weymouthites who had such a cool, quirky look that they could have stepped straight out of one of my books. They asked brilliant questions too.

By then I was peckish and when someone suggested sandwiches on the seafront of course I said 'yes please'. So Vicky, Sam (Headline Experts), Crypt author Andrew Hammond and I headed off for the beach. We were like four little kids on holiday! The sun was out, there was a Punch & Judy show AND a mini caterpillar roundabout ride (which Sam was determined to have a go on until we pointed out she was a grown-up!)

Back at the library I had missed Kate Kingsley's talk about How to Get Published (Check out her Young Loaded & Fabulous series). I hear she was marvelous and wish I'd eaten my sandwich more quickly! Then I got interviewed again, signed some more books and braced myself for Andrew Hammond's Ghost Story Writing Workshop. Andrew's CRYPT series will be launched in September and he led a truly scary session where we came up with descriptive words and wrote a 'Eye Witness Account' of the first appearance of a ghost. Naturally, I joined in and here is my effort:
'The ghostly author suddenly stepped through the wall and shocked his workshop audience right out of their skins. It was gory - skinless bloody teenagers oozing all over the library! Yuck!'
That's all I could fit on the page because I had a thick marker pen!! (www.cryptagent.co.uk)

As if that wasn't enough excitement for one day, we capped it all by attempting to break the World Record for the Longest Scream by a Crowd (a record of 60 seconds held by Ozzy Osbourne's audience). My ears are still ringing! It's yet to be verified but we managed one minute and 6 seconds.

It was a fabulous roadshow, so thank you Weymouth for being brilliant!