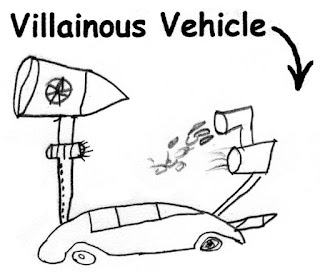 Just completed the first of two action-packed days at The Howard of Effingham School and did 'Villain' character development workshops with 120 Year7s! That's a lot of villains and a lot of evil!! All 120 were completely brilliant and a few were hilarious - comedy genius! I was extremely impressed. I'll scan and post some of my faves later in the week, but in the meantime, here's one of my fave 'Villainous Vehicles'. Don't know who designed it as there's no name, but I want one!